How the U.S. and Individual States Fare on Paid Maternity Leave

As expecting parents or working parents considering having a child, researching your state’s maternity leave policies should be on your to-do list.  This can influence the job you take or the state you relocate to for work.  Our families are the most important things in our lives and we do everything we can to make sure they are taken care of.  This breakdown of where the U.S. currently stands and our state-by-state breakdown of the best and worst maternity leave will help you and your family make smart decisions when it comes to your pregnancy leave and be more informed on your rights.

What is maternity leave?

Maternity leave is a temporary period of absence from employment granted to expectant or new mothers during the months immediately before and after childbirth. These policies are generally aimed at supporting the mother’s full recovery from childbirth and facilitating a stronger mother-child bond. This mechanism has gained greater salience in the past few decades as mothers increasingly enter the workforce.” – Wikipedia.com

Back in 1993 the Family and Medical Leave Act (FMLA) was passed providing certain employees with up to 12 weeks of unpaid leave per year.  Sadly, this did not create a universal system of coverage but rather had stipulations.  To qualify for leave, you would need to meet the following criteria:

The Family and Medial Leave Act does not cover 40% of women in the workforce, forcing mothers who cannot afford time off no other choice than to continue working during the early stages of their newborn’s life.  Additionally, many women do not take the leave provided even when it is attainable for fear that requesting paid time off will compromise their job security.  It’s important to remember that nearly 60% of couples with children have 2 parents that work outside of the home, making family protections an important issue in our daily family lives.

Additionally, on Jan 28, 2016, Defense Secretary Ash Carter discussed reforms that included a 12 week paid maternity leave for women across the joint forces.  This extra benefit is double the amount of time these mothers were previously provided.

“Our calculation is quite simple — we want our people to be able to balance two of the most solemn commitments they can ever make: a commitment to serve their country and a commitment to start and support a family.” – Defense Secretary Ash Carter

Although paid maternity leave has come a long way in the U.S., we still are quite a bit behind other developed countries.  Looking at the colorful paid maternity leave infographic created by Think Progress below, one can see that the United States comes in last at 0 guaranteed paid weeks of maternity leave.  This can be discouraging when noting that we fall behind Iran, Mexico, and the Congo to finish off the list.  Of 178 nations, the U.S. is one of only three others that do not guarantee paid maternity leave.  We are also not among the 50 nations that offer paid leave for fathers. 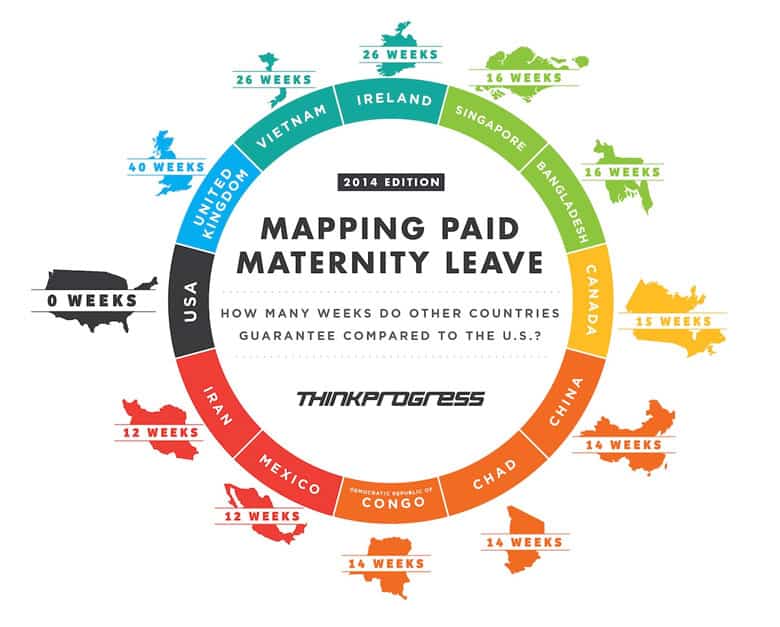 The infographic below, provided by WomenAndTech.com, gives us insight into the number of weeks that the majority of developed countries are providing.

The Best and Worst States with Paid Maternity Leave

Paid maternity leave in the U.S. changes on a state-by-state and even city-by-city basis.  For example, progressive San Francisco became the first U.S. City to mandate full paid family leave, requiring businesses with 20 or more workers to cover this leave.  Additionally, in 2004 California enacted the California Paid Family Leave Act providing 12 weeks of unpaid leave in a 12 month period; that, alongside the California Paid Family Leave program from 2002 which granted employees 55% of their earnings for up to 6 weeks made California one of the best states for paid maternity leave.

A study performed by the National Partnership for Women and Families found that on a state-by-state basis, 37 states received grades of “C”, “D”, or “F”, 12 of which having failed to create any workplace policies establishing assistance for new and expecting parents.

States that have not passed any laws protecting working families since FMLA:

Drew is a writer, a web designer, a project manager, a nerd, and a dad! When he isn't helping with homework or providing piggy back rides, he is playing with new technology, jumping on the couch watching the Packers, or cuddled on the couch with his wife binge watching netflix (after the little one is asleep of course!)

4 Reasons to Visit the Valley of Fire...

Kids Burst Into The Room In The Middle...

First Weekend Vacation to the In-Laws