Why Your Child Should Compete In A Karate Tournament

For the last five months, our 10-year-old has been taking karate lessons.  We were looking for an alternative to general sports, but something that would keep him active, competitive, and teach team building skills and discipline.  Karate satisfied all of those needs for us and this weekend we participated in his first tournament, the Ozawa International Karate Tournament held yearly in Las Vegas.  This was an eye-opening experience for our entire family and showed me not only why karate can be a great tool for your child, but why your child should compete in a karate tournament (whether your child is currently taking classes and hasn’t competed, or is looking to get started).

Karate is a martial art that was originally developed in the 1300s in the Ryukyu Kingdom.  It has evolved over the decades to become a striking art utilizing punching, kicking, knee strikes, elbow strikes, and open-hand techniques.  Over time karate adopted the white uniform that was made up of the Kimono, the Keikogi, and colored belt ranks. Karate teaches not only patience, discipline, and respect, but also memorization and confidence. 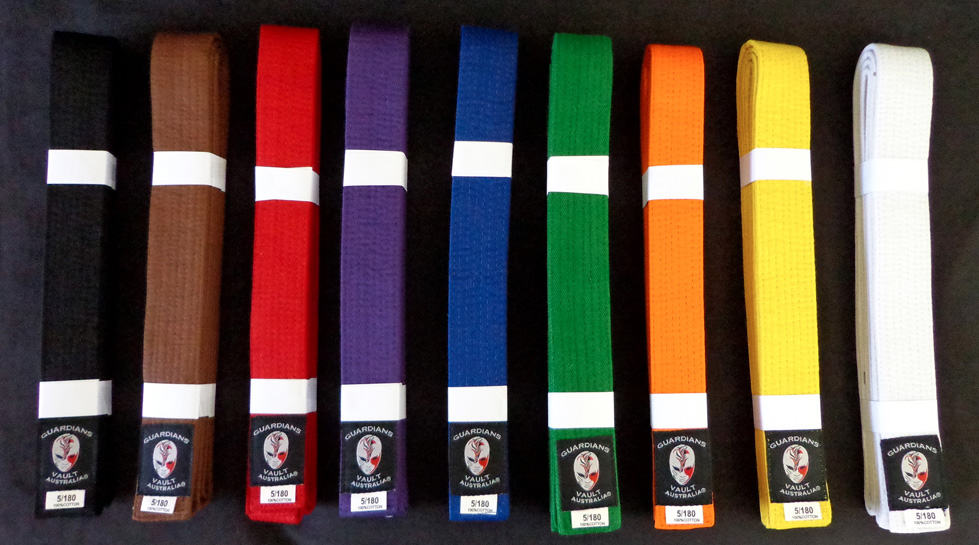 Throughout my youth, I have participated in everything from soccer and basketball tournaments to track meets and archery competitions, but I have yet to experience anything quite like I did this weekend at the karate tournament.  Even as a spectator I learned a lot, and felt the unity and respect placed upon the artform.  There are many benefits that your child will gain from participating in a karate tournament and here are a couple of them.

Learning to build up their peers

If you have ever experienced a moment where you are watching the Fifa World Cup or Olympic games that came down to the wire and began to feel overwhelmed with excitement and pride for your country, cheering the competitors on to victory, you will understand this benefit.  I saw a group of 18 kids and adults who have learned and grown together for the last couple months as friends become a family and a team. 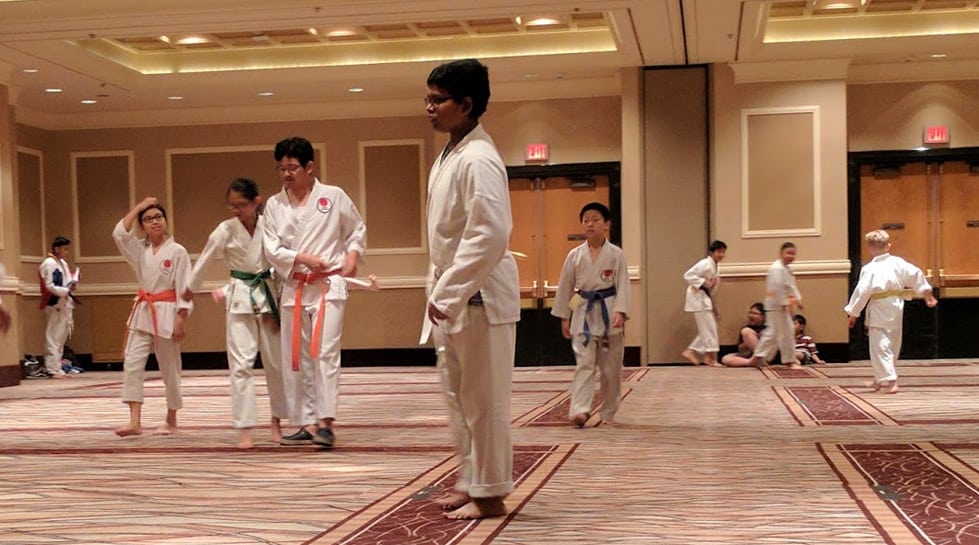 Our studio warm up with the kids

During our weekly practices, the kids do individual work as well as group exercises and routines, but the competition is always internal.  After sparring matches or routines all of the kids clap for each other as you will experience anywhere, but it wasn’t until the karate tournament I saw them start to root for their teammates.  Our group’s ages range from 6-55, and when I watched one of the youngest on his feet cheering on one of our team members in the adult division during one of his sparring matches, I was impressed!

Although all of the events we participated in were individual events, the kids made sure when they weren’t waiting in a queue at a ring, they were tracking down their friend’s area and sitting on the sideline to see how they did.  I heard my 10-year-old screaming “You can do it!” to one of his friends as he traded points back and forth with a student from another studio.

One of the biggest lessons I learned is there is a huge difference in the confidence a child has during the comfort of practicing forms and sparring at their local studio and competing in a karate tournament.  Over the last 5 months, I have watched our publicly shy 10-year-old grow every week during practice, getting more and more comfortable being front and center around his peers.  I saw this continue to show even more as he progressed through the tournament.  All of his routines were on full display, his friends were watching, his pride was on the line, and he did amazing.  I could see a different look on his face as he went through his routines with confidence and joy.

Seeing the results of practice and hard work

For the kids who were participating in their first karate tournament, whether they won medals in their individual events or not, I could see a change in their nerves after only their first event.  For a lot of kids, this was the first time, in a very public way, they were putting their skills to the test.  Competing in front of complete strangers with their teammates and families cheering them on boosted their confidence during the tournament, and will continue to do so for the practices and events to come. 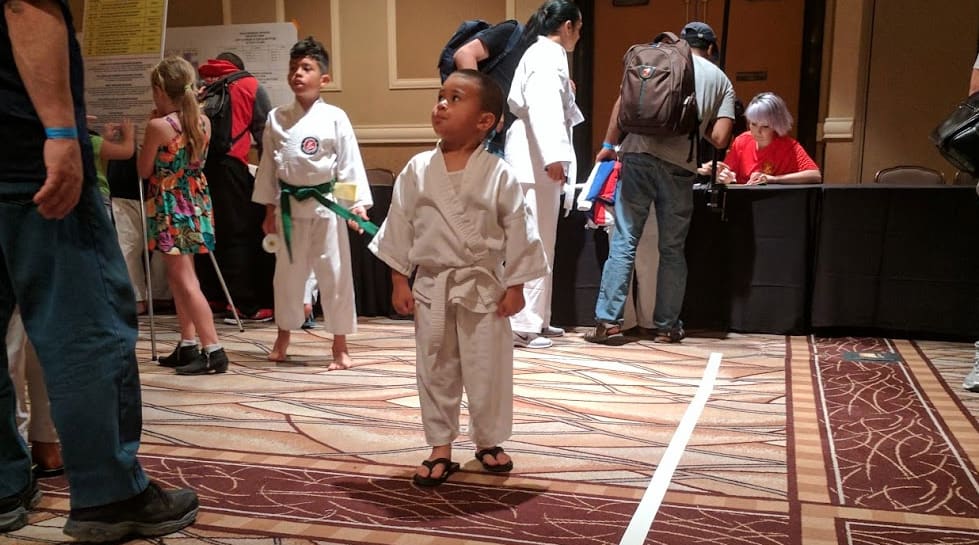 Mark looking on as other groups warm up

Just as there is a big boost of confidence from studying for a test and getting a good grade, the self-satisfaction of winning their first medal in an athletic event and seeing how far they have come since they began the sport has a large impact on kids.  It was also exciting for the younger kids watching the older divisions to see their older classmates compete and get a glimpse as to what is in store for them.  With the mixed ages of a studio, some of the practices can be toned down a bit as far as the difficulties of the workouts to accommodate all of the belts, but at the tournament, they saw the older group displaying their full abilities.

This is one of the big lessons I saw rippling through our studio practices, only to be amplified at the karate tournament.  During the first few weeks of practice, it only took our 10-year-old catching a roundhouse to the side of the head by one of the orange belt girls in class during sparring to wake him up thinking “Wow, she kind of kicks butt.”  He went from thinking “Hey, I can take on anyone in class” to “Dad, please don’t pair me against Shai-Shai (one of the brown belt girls in class who really excels), she’s so good! I need more practice.”

At the karate tournament, competitors are split by age and gender, but for all of our kids being able to watch the girl’s division go head-to-head definitely showed them that women stand on equal footing and are a force to be reckoned with.

Comparing what they have learned

During a karate tournament, you not only demonstrate your own abilities and routines but get to see what other peers bring to the table.  I began to notice that karate is unlike most other sports in a big way.  For example, there is generally one method when you are teaching a kid how to shoot his first free throw, but in karate, there are many different styles and disciplines.  For most kids, the only “style” of karate they have seen is what our sensei has taught in class, but at the tournament, there were many, many styles on display.

Even from the opening stretching and warm-ups, some studios put on small performances with synchronized routines and shouts that we’d never seen before.  We watched one of these groups as we were waiting in line to register for our first event.  They were very organized and had a completely different warm-up practice than our studio, which was new for our son to see.

Lastly, an added benefit of competing in an international karate tournament is exposing your kids to different cultures.  During the opening ceremony, we watched as studios from Canada to Japan presented their studio or country flag as they entered the arena.  It was a great moment for the kids to encounter the coming together of many different types of people to celebrate an event.  Watching kids their age from across the globe enjoying the same sport they were, warming up the way they did, and putting their own flare and spin on karate was a great experience for them, especially the younger ones.  Throughout the karate tournament, you felt a very strong sense of pride, togetherness, and community from all of the participants.

So whether your kid is currently enrolled in karate and hasn’t participated in a karate tournament yet, or you are looking for a new activity to put your son or daughter in, I would suggest driving them towards participating in their first karate tournament and watch them grow.

Drew is a writer, a web designer, a project manager, a nerd, and a dad! When he isn't helping with homework or providing piggy back rides, he is playing with new technology, jumping on the couch watching the Packers, or cuddled on the couch with his wife binge watching netflix (after the little one is asleep of course!)